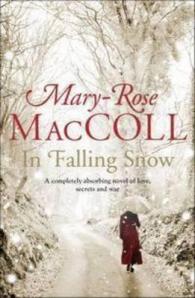 In Falling Snow by Mary-Rose MacColl

In Falling Snow tells the story of Iris Crane, a young Australian woman who goes to France early in WWI. Her mission is to rescue her run-away brother, only 15, who lied about his age to fight for the Brits. Upon arrival, she meets the charismatic (historical) figure, Dr Frances Ivens, who was leading a team of women doctors and nurses in setting up a field hospital. The Scottish Women’s Hospital was established in the abbey of Royaumont, north of Paris, and the transformation from filthy, crumbling ruins to operational hospital was nothing short of miraculous.

The team of women, under the leadership of Dr Ivens, flourishes, despite the devastation around them. Iris comes of age, with her wonderful gifts in language, administration, compassion and nursing coming to the fore. While the stream of wounded flow in, Iris must comfort the dying, assist the doctors, and somehow keep her brother safe. She forms a deep bond with a headstrong woman ambulance driver, and she meets a man and falls in love.

Braided into the Royaumont tale is the parallel story of an older Iris, now in her eighties in Australia, and her granddaughter Grace. In the late 70s of Brisbane, Iris’s life is ebbing, and the full story of what happened at Royaumont begins to seep out. Ghosts from the past arrive with an invitation to Royaumont for a reunion, and long-lost friends reappear. No one realises just how much those war years have shaped their lives.

Mary-Rose MacColl has written a memorable story of secrets, of loss and regret, sacrifice and fulfilment. The structure, moving between the stories of the young Iris and the old, worked well, although I occasionally found Grace’s storyline hard to read. Her work as an obstetrician stirred up visceral memories that made me squirm. That, however, is testament to the power of MacColl’s writing. The field hospital history is a marvel in itself, but the imagination of MacColl brings the incredible women of Royaumont beautifully to life. The gobsmacker of a twist at the end is the icing on this marvellous gateau.