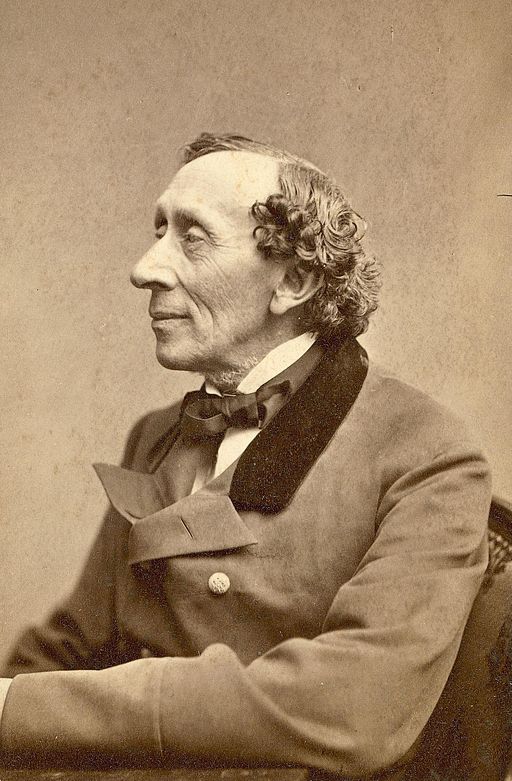 If Kidlit has a granddaddy, it would have to be Hans Christian Andersen. The second of April is his birthday, a fitting day to mark as International Children’s Book Day, hosted by IBBY (International Board on Books for Young People). I went in search of some interesting morsels about the puzzling man behind some of the world’s most beloved fairy tales.

School was “dark and bitter” for poor H.C. The headmaster beat him with a view to improving his character, and his teachers discouraged him from writing at all. The reasons for the mistreatment aren’t clear, but it might have been because Andersen suffered from dyslexia, which was sometimes misconstrued as a motivation problem.

He left home with his mother’s blessing at the age of 14 with the stated goal of becoming famous. He tried his hand (and feet) at singing, acting, and dancing. While his lovely soprano voice lasted, he enjoyed some success, but when his voice changed, he had to abandon dreams of theatrical acclaim. It was many years before he enjoyed the fame he dreamed of as a boy.

He had better luck with writing, despite the added challenge of dyslexia. Some say his spelling issues induced a simplicity and “freshness” of style, which contributed to his wide appeal. Other critics note that his profound wit and pathos were difficult to translate. Nevertheless, he became both a Danish National Treasure and one of the world’s most beloved writers, whose stories inspired movies, plays, ballets, and animated films.

Despite fame and literary success, Hans Christian was unlucky in love. He had the unfortunate habit of setting his affection on unattainable targets, like dancer Haralf Scharff and Jenny Lind the opera diva. Jenny was the inspiration for his story, The Nightingale. He proposed in a letter, and she rebuffed him (in writing) with best wishes to “someone she thought of as a brother.” Andersen never married, and according to his journals, he forsook sexual relations, though he expressed painfully passionate feelings in letters to women and men.

While his lack of good looks might have hampered his love life, they worked in his favour as a writer. His insecurities and experiences of rejection informed one of his most widely known stories, The Ugly Duckling. Never mind the high forehead, protuberant nose, and absent eyebrows: When your stories become bywords, you know you’re famous. The terms Ugly Duckling and the Emperor’s New Clothes have both wormed their way into common usage in many languages for the past century and a half.

It took the literary world a decade to “discover” Andersen’s genius for fairy tales. He felt despondent in this period and was ready to quit, even though he had high hopes for the genre, believing that eventyr (Danish for fairy tale) could become a “universal poetry.” It was prophetic, with most of his stories being read around the world for well over a century. His most famous stories include:

Modern readers are most familiar with the sugar-coated, Disneyfied adaptations of his work. The original stories were rather grim and grisly: The steadfast Tin Soldier melted away. The Little Mermaid committed suicide. The Little Match Girl froze to death. Not exactly a bunch of happily-ever-afters.

H.C. was welcomed into the homes of the noble and famous throughout Europe. Charles Dickens was a friend, but he cut ties with Andersen after the Dane overstayed his welcome one summer. H.C.’s journals express bewilderment and sadness over this and other social situations that ended badly.

Perhaps he was socially awkward, but H.C. was a tender-hearted soul. On his deathbed while discussing music for his funeral, he commented, “Most of the people who will walk after me will be children, so make the beat keep time with little steps.”