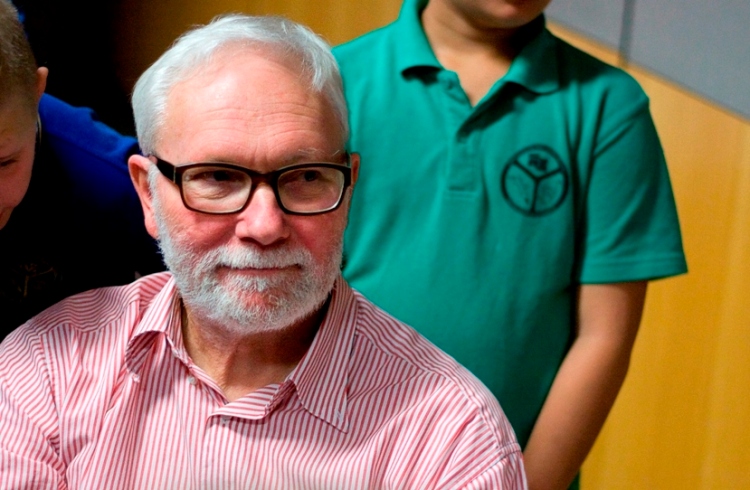 With fifty books to his credit, Aussie kidlit author James Moloney has plenty of wisdom to share about writing a book series.

His first series was The Book of Lies. Because it was originally written as a stand alone, he learned what not to do for future series.

Here’s the Goodreads blurb for the book (How good does this sound?)

The newest boy at Mrs. Timmins’s Home for Orphans and Foundlings awakes at first light with no name and no memory. But a strange girl who hides among the shadows of the orphanage tells him that a mysterious wizard’s creation, the Book of Lies, holds the answers, and then gives him one clue: “Your name is Marcel.”

The Book of Lies trilogy was followed by the Silvermay Series and the Doomsday Rats, with numerous other books and collections all around. [Buy James’s books here]

Brisbane Write Links hosted James at their May meeting at the State Library of Queensland. He presented a workshop called Writing a Series, which was a sell-out. It included lots of great tips, some of which I tweeted. Like this one about the new sophistication of young readers. Publishers are not shying away from tough subjects and harsh realities (like beloved characters dying).

James made it clear that for series writing, the author has to make sure that her ideas will sustain a story for multiple books. This has to be considered when:

James Moloney #aussie #kidlit author: "Your protagonist is only as good as the antagonist standing against her." BNE WriteLinks

James Moloney #aussie #kidlit author: "Work on your world like you would your characters. Allow room for plausible change and growth."

Attendees were given a glimpse of James’s creative process, which involves:

Do Editors Even Want Series?

James was honest about the chances of breaking in with a series. Even seasoned writers are not getting multiple book contracts these days. Instead, publishers buy one book and see how it goes before committing to a whole series. Even then, it might be bought book by book.

James finished the workshop  with some insights into what editors are hungry for and sick of nowadays. In short for YA: Paranormal is done, kaput, so yesterday. Contemporary realism (a la John Green) is hot. James noted that the “first-person, in-your-face female narrator” seems to be getting a lot of airtime.

James Moloney #aussie #kidlit author on what editors want: vampires need not apply. Anything with a tail or wings isn't selling. #WritingNow

James’s workshop was spot-on—lively, interactive, and full of insight. The James Moloney website has heaps more information. Be sure to check out the Write Links website to read my interview with James, where he spills the beans on early influences to his writing and other really good stuff!