Queen Victoria’s Book of Spells: An Anthology of Gaslamp Fantasy by Ellen Datlow
My rating: 4 of 5 stars

According to Amazon, Gaslamp fantasy is “historical fantasy set in a magical version of the Nineteenth Century.” While its first cousin Steampunk emphasizes mechanics, science and steam power, Gaslamp plays with magical possibilities. Check out my exposé of the genre on Spilling Ink.

This anthology includes spinoffs of Dickens and references to real people of the Victorian era. Queen Vicki herself gets a cameo in at least two stories. One of her prime ministers, Benjamin Disraeli, stars in The Jewel in the Toad Queen’s Crown while William Morris, textile designer, poet, translator and social activist, takes the stage in the story For the Briar Rose. This is definitely one of those books that whets your thirst for more information. I have a brand new fascination with both Morris and Disraeli and can’t wait to see where these rabbit holes lead me!

I listened to the audio version of this book. It’s one I wish I had read instead. Three of the stories are epistolary, which sometimes doesn’t lend itself to audio. The performance by narrator Kelly Lintz was fine, but it’s a book to dip into again and again. I will probably end up buying a physical copy for my shelves.

The list below includes what I felt were the standout stories:

The Vital Importance of the Superficial

by Ellen Kushner and Caroline Stervener (Epistolary, and superbly done.)

A Few Twigs He Left Behind

by Gregory Maguire (A fascinating epilogue of Scrooge)

Maguire’s offering in particular left me hankering for more of his writing (which surprised me because Wicked (the book) was not a big winner with me). I will also seek out works by Delia Sherman and Ellen Kushner. Book one of the Tremontaine series has been ordered…

A Funny Little Aside…

I saw a newsworthy post  on Facebook about Australian illustrator Kathleen Jennings, whom I met a couple of months ago at a SCBWI meeting in Brisbane. I have since followed her blog and have become a fan of her gorgeous artwork. She does amazing paper cuts, water colours and pen and ink pieces.  She’s a very talented woman—and super-interesting, too.

So a couple of days ago on FB, I saw that her art was selected for a prestigious New York City art show, Point of Vision: Celebrating Women Artists in Fantasy and Science Fiction. I contacted her to ask if it would be okay to share her news and maybe a photo from her feed with the SCBWI ANZ network. She said yes, but the photos weren’t hers; they belonged to Ellen Kushner.

A little backstory before I go on: I’ve recently stepped into a new marketing and communications role, so I contacting “Ellen” to seek permission to use the photos was par-for-the-course. I searched for and found Ellen on Facebook and sent her a request. As you do (?)

The next morning on my drive to work, I was listening to my audio version of Queen Victoria’s Book of Spells, and a new story started. The Vital Importance of the Superficial by … Ellen Kushner.

Hang on, I thought. Ellen Kushner, like … the lady I messaged last night?

Anyway, enough with the weirdness. Check out Kathleen’s website. She regularly posts her art and thoughts. Congratulations to her for her achievement of a showing in NYC.

Here are a couple of the covers Kathleen did for Ellen Kushner’s Tremontaine Series. Aren’t they gorgeous? I’ve downloaded book one for a little sample. 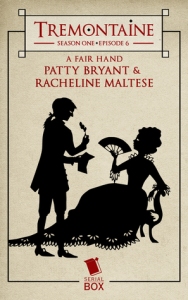 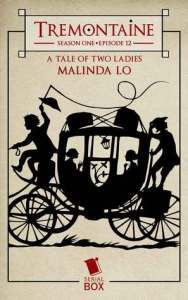 Buy the Tremontaine books here (among other places). You can buy Kathleen’s artwork here.

View all my reviews